Just one year after the introduction of the H0 gauge, Fleischmann presented the first US steam locomotive in 1953: the tender locomotive with the wheel arrangement 4-6-2 and the catalog number 1365.

In the years to come, Fleischmann brought out more locomotives and wagons, which were apparently sold in large numbers and are increasingly coming onto the market today.

The stationing of US soldiers in Germany and the active commitment of the American importer probably contributed significantly to the sales success of the US models.

Apparently, the GIs often took model railways to the USA as gifts, which was also helped by the then very favorable exchange rate of $1 = DM 4. Packs/sets were very popular because nowhere else do so many sets appear than in the USA.
However, the gifts were certainly not always well received, because there is no other way to explain the fact that new, unused sets are constantly being offered from the USA.

The last US steam locomotive was the 1967/68 0-8-0 tender locomotive 1351A of the „New York Central“, which is one of the rarest Fleischmann locomotives ever.

The wheel arrangement of the locomotives have different designations in the USA than in Germany. Furthermore, the individual axis sequences are identified by names:

The following description of the locomotives produced is  structured chronologically  in order to be able to follow the development of the models.

Just 1 year after the introduction of the H0 gauge, Fleischmann launched the US Pacific tender locomotive, catalog no. 1365 out.

The locomotive BR 01 catalog number 1360 was „Americanized“ by Fleischmann in such a way that the locomotive was painted completely black and the attributes typical of US locomotives such as: single headlights in the smoke chamber door, bell and cow catcher were installed.

The cow catcher was bolted to the chassis.

The first 1365 were delivered in 1953 with the German plastic tender of the 1360. These locomotives are very rare as they were only made for a short time. They are also available under catalog no. 1360S known.

The starting model for this locomotive was the German locomotive with the catalog number 1305. The company number is 1305 1954

This locomotive is also painted all black. The locomotive shell is made of plastic.
The locomotive has a single headlight in the middle of the smoke box door. The buffers were removed, but reinstalled for a short time in 1954-55. In 1955 the locomotive received stairs at the front.
From 1957 the stairs were replaced by a cow catcher.

A new US-style plastic tender was developed for the 1305A

The most sought-after variant of this loco is the „Baltimore & Ohio“ version on the 1959 tender.

The basic model was the tender locomotive BR 80 with catalog no. 1320, which appeared in 1952 as one of the first H0 models.

The „Americanization“ was accomplished by removing the fan cowl on the cab roof, adding a bell in front of the cab, removing the bumpers and blackening the chassis and wheels.

Variant -1 without a locomotive number is much rarer than the 2nd variant.

Since 1954 the tender locomotive with a 4.5 volt battery drive has also been offered under the catalog number 1000 A.

The model was derived from the German model, catalog number 1000, with the wheel arrangement B.

The wheels were blackened and the bumpers removed on some models. The locomotive was given the 4-axle plastic tender that had been developed for the 1305A model.

The models are very rare.

The model was derived from the German model of the 24 series catalog number 1350.

The US version got the well-known tender of the 1365, which was later also used for the locomotives 1366 and 1367.
The chassis is black, as is usual in the USA, and single-light headlights were installed in the smokebox door. 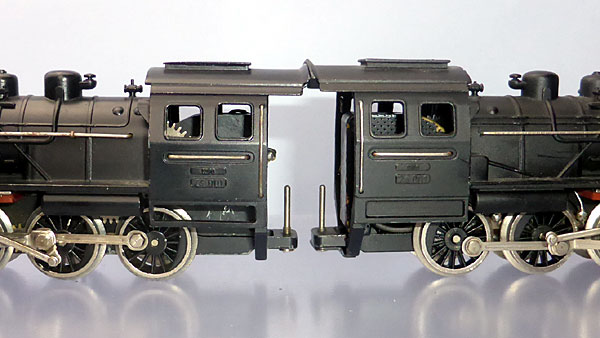 Driver’s cab side walls open and closed at the bottom

In 1957, at the same time as the battery tank locomotive BR 89 catalog number 1001 was introduced, an Americanized variant
with blackened wheels was introduced. This locomotive is quite rare as it was probably only produced in 1957.

Sets with this locomotive are not known to me.

Also in 1957, an American variant of the German T3 (catalog number 1315) with black wheels and black chassis was offered in the USA.
The locomotive was sold in a set together with German wagons.

From 1957 the „Pacific“ tender locomotive with the catalog number 1366 was offered as the successor to the 1365.

During the relatively long production time of 10 years, a whole series of variants were created:

The locomotive has a metal body and chassis. The cowcatcher is cast. The locomotive is painted completely black. The US standard tender was used as the tender.

The case is from the 1315 and is all black with no decorative lines or handle bars. The lamp housings are closed at the front. The middle driving axle was removed from the chassis so that the locomotive has the wheel arrangement 0-4-0.

The locomotive has stairs at the front and not a cowcatcher as stated in the Mikado.

US tender locomotive with a „Pennsylvania“ RR inclined tender, US version of the 1304, black chassis and wheels.
First in the catalog in 1961, the last locomotives were produced in 1968-69. These locomotives were often offered in starter sets.

In 1962 the tank locomotive 1321 was Americanized and sold with the catalog number 1322 only in the USA.
The locomotive has 3-light lighting on both sides and not, as stated in the Mikado, single-light headlights. However, the lamps above the buffer beam are covered.

This locomotive is certainly one of the rarest Fleischmann locomotives ever.

As the last model specifically for the US market, the 0-8-0 wheel arrangement with a tender, catalog number 1351A, was manufactured in 1967.
Locomotive and tender are made of plastic. The drive is in the tender. The locomotive has the typical single headlights on both the locomotive and the tender.

The locomotive has the road number „246“, the tender is inscribed „New York Central“.